The port of Rome

The port of Civitavecchia ( also known as the port of Rome ) is a milestone of the mediterranean cruises, and it is also the starting point and arrival of the many ferries that connect it to Sicily, Sardinia, Spain and France. Together with Barcelona, this is the harbour with the highest traffic of cruise ships and ferries in the Mediterranean Sea.
Some of the most popular cruise lines that stop in Civitavecchia: MSC, Royal Caribbean, Celebrity Cruises, Norwegian Cruise Line, Aida, Oceania Cruises, Holland America, Viking Cruises, Costa Cruises.
The ferry companies leave from the "Autostrade del Mare" terminal: Tirrenia, Moby Lines, Grimaldi Lines, Grandi Navi Veloci. There are many destinations, not only for vacation in Sardinia: Cagliari, Olbia, Arbatax, Porto Torres, Palermo, Termini Imerese and Barcelona.
Free shuttles to the port terminals leave from Largo della Pace.

Despite the passage of time and the high traffic of tourists, the old part is still well preserved and offers interesting historical and artistic evidences. The port of Civitavecchia was founded in the second century d.c. by the Roman Emperor Trajan, and it is known since then as the port of Rome. The original Roman structure has been preserved until the present day, but over the centuries several popes contributed to the development and fortification of the port of Civitavecchia, considered a strategic stronghold; several monuments and defensive structures were built, and they are still visible to the public. From our apartment in the center of Civitavecchia you can walk 15 minutes and get to the Varco Fortress of the harbor.

Once at the Fortress gate, the first masterwork you will see is the Michelangelo Fortress(1), a military building commissioned by Pope Julius II to defend Civitavecchia from pirate attacks; the same pope laid the foundation stone in 1508. The work was carried out by Bramante and his students, but the construction of the highest tower was entrusted to Michelangelo Buonarroti. The fort features four cylindrical towers plus the main octagonal tower. In the south west tower there is the small chapel dedicated to St. Fermina, patron of the city, whose celebrations are held every 28th of april. Nowadays the fort is home to the harbor master.

Next to the fortress there is the imposing massive wall (2) of Urban VIII, commissioned by the pope in order to protect the city (17th century); the dutch architect Vanvitelli built a wonderful fountain in the central part of the wall (1743), entirely in travertine marble, representing the head of a faun from whose mouth the water flowed.

Little further you can admire Porta Livorno (3), the monumental gate built in 1761 by Pope Clement XIII to link the port with the north side of Civitavecchia. Destroyed by bombing in 1943, it was recently restored to its former splendor.

Porta Livorno is located in front of the Rocca (4), a castle built in 1400 in addition to the ancient defensive walls. It was almost completely destroyed by bombing in World War II, so the part you can see now is only the base of the original structure.
Continuing in the same direction (over the Fortress) you enter the Roman docks, where the fishing boats are docked and where in the afternoon you can buy fresh fish directly from fishermen.

Leaving behind the fishing boats, you will reach a large roundabout at whose center there is a statue of the emperor Trajan; walking along the ancient defensive walls on the left you arrive to the ancient Molo del Lazzaretto (5). This pier was part of the ancient port built by Trajan and, despite 2000 years of life and many attacks, has survived to this day in excellent condition!
The tower served as lighthouse for inland navigation of the port, while the pier was crossed by several tunnels which facilitated the flow of water, so as to avoid the silting of the dock.
Because of the plague in 1656 the fort was turned into a shelter for infected people until 1800, hence the name Lazzaretto. 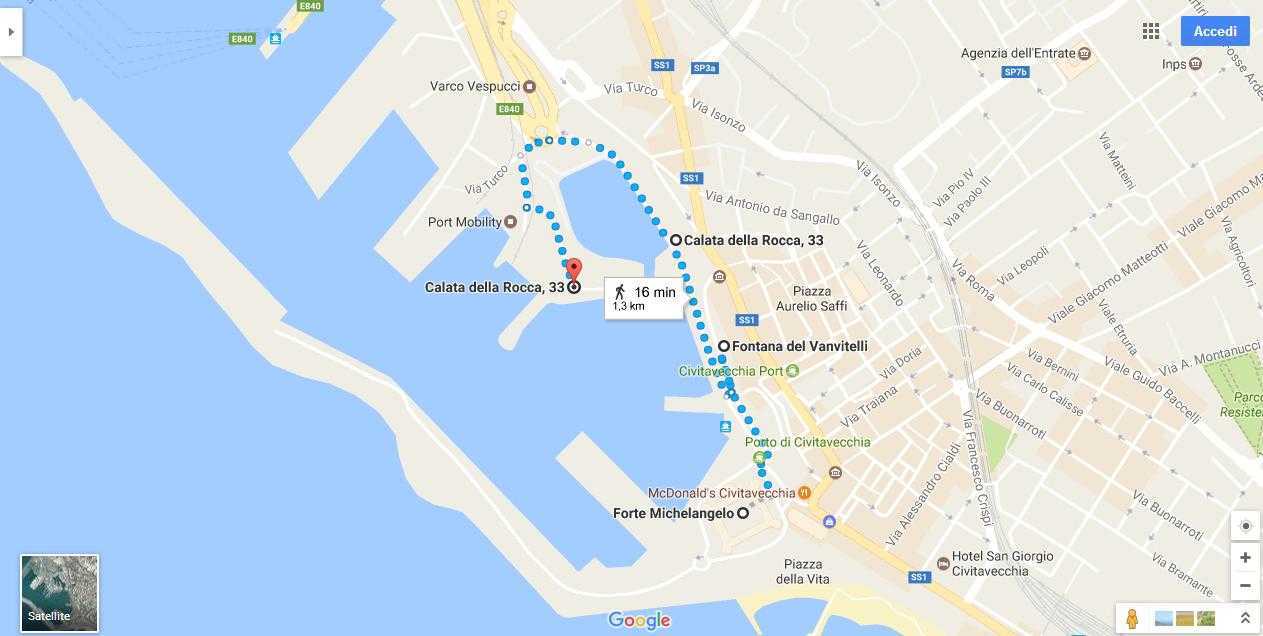 At this point who wants to enjoy a magnificent panoramic view of the harbor can go back to the fishing vessels, out of Porta Livorno and take on the right the walk of Lungoporto Gramsci overlooking the ancient wall of Urban VIII.
Enjoy your view!